Evolution of the Nation’s FPS, Return of the King of FPS

Quake Wars Online is a brand-new tactical FPS title
that has been successfully rebuilt
as an online version based on the original
title of Enemy Territory: Quake Wars, and compiled
a collection of game development technologies of ID soft,
Activision, and Dragonfly.

Quake Wars Online is reborn using its brand power that combined between ‘Quake brand’, renowned as establishing the stage for network FPS genre in the early game market, and ‘Dragonfly Technology’, the leading FPS online developer in Korea. The game has not only game elements and storylines of the original console version, but also entertains players with lots of fun elements specialized for the online game.

In particular, the game has a massive co-op game play feature that has been extended from a small squad battles to a large-scale field battles, driving vehicles and commanding deployable units which allows players to experience more realistic compact battles and missions. A great amount of fun will be maximized while utilizing team-based strategies during game play. Set on the futuristic Earth of 2060, a realistic large-scale battle between a barbaric alien race called the STROGG and GDF (Global Defense Force) is in unleashed. 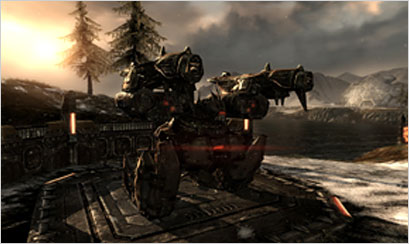