Embodied as the game of unique feeling that changes the battle according to the point of view with overflowing reality with the historical research of Platoon that was responsible for the military consultation of the film, ‘TaeGukGi: Brotherhood of War’. Game users are able to select the items and guns of the special force live with reaction and hitting sense per each weapon along with the characters of the special force from various nations such as the SAS and DELTA FORCE to build the special force members of essential abilities. Through 10 different factors per weapon such as damage, speed, direction the movement of view due to reaction, the actual and active feeling of the battle can be directly experienced.

SAS, DELTA FORCE…
Special Force, left hidden underneath a veil and closed to the public. Unlike an all-out war, the strong powers of the special force that places the accurate blow at a short period of time by deeply penetrating has been settled as the nation’s power in the modern war. Special Force can only be operated by the nations that can support the enormous capital fund and the technical expertise. The members of the Special Force are armed with satellite communication and cutting-edge weapons to be trained to complete their mission within any environments. This period in time where there are no enemy countries by the opposition of ideologies, the special battles of the special force without sound amongst the nations by the understanding relations of each nation are still being occurred. You must hide away your emotions and fears and complete the mission for your nation according to the training and manual. Only the faith through the breath of your colleague is needed… 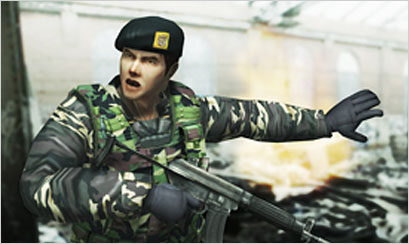